ArtStarts on Saturdays with Stories on Wheels! 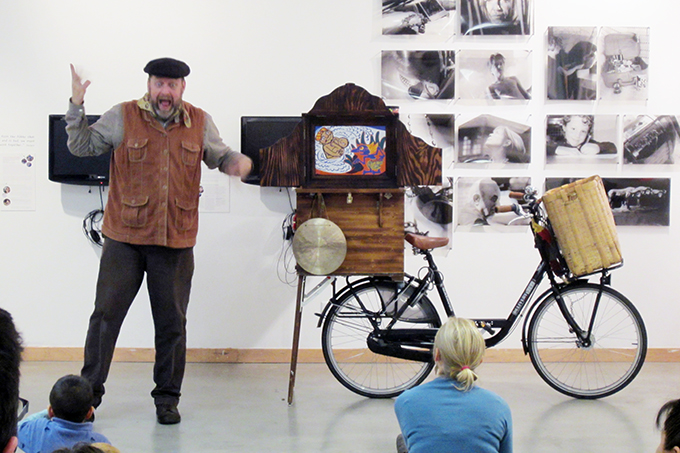 ArtStarts on Saturdays in October was a cold, rainy day outside... but inside it felt more like summertime. When the stage on on a bicycle, it definitely feels like you're relaxing in a park...

Pangaea Arts' Stories on Wheels rolled into the ArtStarts Gallery in style... with a miniature stage mounted on the back of a bicycle!

Though it was new to everyone in the audience, this form of storytelling - called Kamishibai - was originated by monks in 12th century Japan. "Kamishibai" literally means "paper drama", and the stoyteller uses paper slides that he inserts into his miniature stage to help tell the tale. Leonard, the storyteller, explained that since television became popular in the 1950's, Kamishibai lost its popularity... But fortunately for us, it is starting to make a come back! Using two wooden clappers, called hyoshigi, to announce his arrival, Leonard fascinated the crowd with tales from Indonesia and Japan. Thanks to Leonard of Pangaea Arts for an unforgettable time! See more photos from Stories on Wheels in our ArtStarts on Saturdays Facebook album!

And on Saturday, November 24, join us for the next ArtStarts on Saturdays, with Spin Cycle!