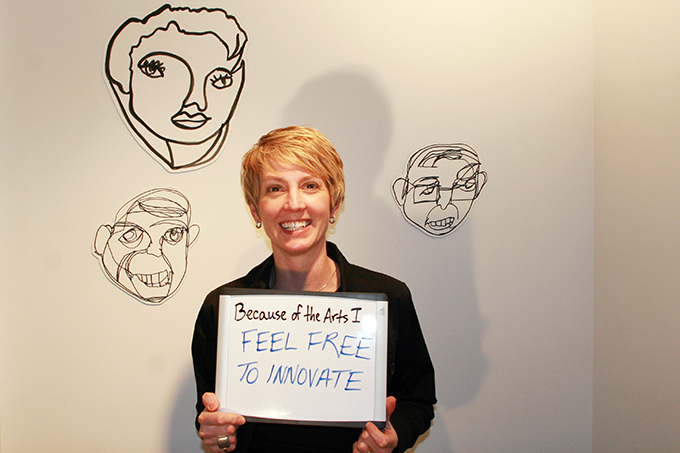 Arts and culture lovers gathered at the ArtStarts Gallery last night for A&C Mashup. The event was organized by ArtStarts as part of BC Arts and Culture Week, in celebration of the role the arts play in learning and in life. Thirteen dynamic members of Vancouver's arts community took to the stage to entertain, inspire and inform (presenter roster listed here). Directors of prominent arts organizations shared the spotlight with professional performing and visual artists. Though each of the presenters shared their thoughts and feelings about the arts from their unique vantage point, there was a common thread that ran through all that recognized the value of collaboration and the ability the arts have to inspire and connect people and create community. This sense of community came to life when music educator, Hussein Janmohammed invited the audience to make music together, asking everyone to first symbolically throw away their baggage and inhibitions about singing. The gallery was then filled with the sound of many voices coming together to create music.

Cris Derksen wowed the audience with her original approach to playing the cello. She spoke about her own musical journey and shared how she originally wanted to play the bass but ended up with the cello as it was the biggest instrument that would fit in her mother's car.

The program culminated in a spontaneous piece grounded by Rupinder Sidhu's hip-hop beats merged with Hussein conducting the audience in a multi-faith chant and Dianna David dancing up on stage in her signature style and character. A Mashup indeed!

The feeling of engagement continued after the presentations as guests took turns completing the sentence, “Because of the Arts I…”, with their responses then captured in photos.

Because of the Arts I... Thank you to the 13 presenters who shared their passions and talents with us, to Jeff Bryant for being a fabulous MC, to Ethical Bean for providing the delicious doughnuts, to all the people who came down to share in the energy and excitement of the evening and to our special volunteers who supported the event to the very end.

reetsinvancity said: Had such a great time last night at the #ACMashup. Thanks @ArtStarts for bringing together such a dynamic and talented team!

dropthep said: @ArtStarts it was great! Didn't know what to expect but was pleasantly surprised #acmashup