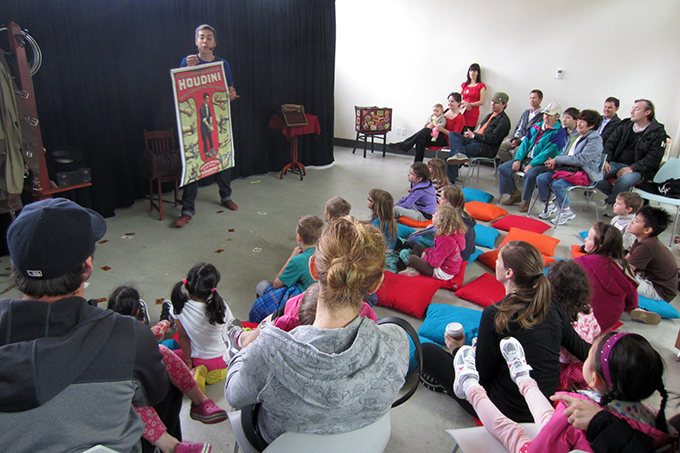 On Sunday, the New Westminster Quay was filled with anticipation and excitement as ArtStarts launched its very first event at River Market. It was a full house, with magician Sheldon Casavant who delighted audiences with two 45-minute magical performances/workshops titled Exploring the Impossible. Sheldon also appeared at ArtStarts on Saturdays at the ArtStarts Gallery in downtown Vancouver, where the scene was also abuzz with energy and magic. Sheldon happily shared his own personal story of discovering magic at his local public library at a young age. He encouraged his audience to read books, imagine, never give up and think the impossible! Sheldon also revealed some of the secrets to his magic tricks and generously rewarded two lucky participants with his new children's book titled Morton the Magician and His Magnificent Magic Show.

Check out lots more photos on Facebook from Sheldon Casavant at ArtStarts on Saturdays and at ArtStarts at River Market.

Thanks to Sheldon for two amazing days! Stay tuned for the next month's events with award-winning artist and illustrator Julian Lawrence who will be leading a comic-making workshops at ArtStarts on Saturdays in Vancouver on Saturday June 29 and ArtStarts at River Market in New Westminster on Sunday June 30.