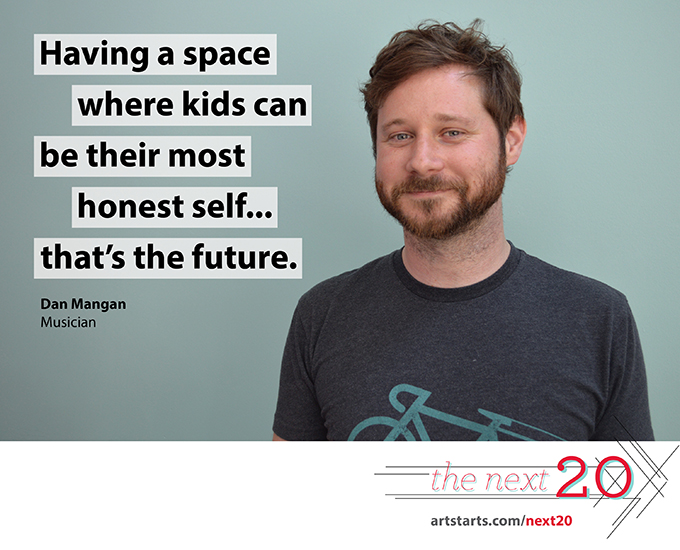 This week's Next 20 community builder is Vancouver based and internationally renowned singer-songwriter, Dan Mangan. In addition to releasing critically acclaimed albums, Dan has scored music for film, is a contributing writer to Huffington Post Canada, The Guardian and Montecristo Magazine, and a two-time Juno award-winner. For Dan, songwriting is a creative tool that allows him to process the world around him, which is evident in his latest release, Unmake.

Where did art start for you?

My parents were not big on TV so to pass the time, my brother, sister and I rummaged through my parents LPs. We had a piano and by the time I was 7 or 8, I had learned how to play Abbey Road on it. Starting in music is scary, it's this thing that other people can do that you can't do at first. So that started my confidence in playing music.

Do you have any particular influences in your life that have shaped where you are today?

There was one guitar teacher. I have so much respect for the fact that this man was trying to light a fire in these kids. Kids are like walking little embers and they have the potential of burning HUGE or they have the potential of being extinguished. If you have teachers that come and wave a fan at the ember, it turns into a small flame. If you get another great teacher who takes that small flame and turns it into a big flame, that's a huge thing.

Kids who just go through the motions and then they finish school and are like, "Now what? I don't really know what I like and I don't really like doing stuff" never have a fire lit. It's one thing to be uncertain about what you want to do, it's another thing to not want to do anything at all. That's unfortunate because it's not really taking advantage of what it means to exist. If you have teachers or things or events in a kid's life that light that fire, then the potential is infinite. Who knows how many people had to light a fire for Barack Obama for him to be president, and how many people had to light a fire for John Lennon? 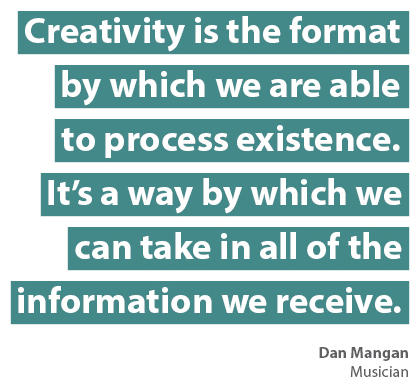 Creativity is the format by which we are able to process existence. It's a way by which we can take in all of the information we receive. Our brain is constantly inundated with so much information, and I think that people do destructive, violent things, particularly when they don't have equilibrium. So, for me, having an outlet that is creative, is everything.

Unfortunately, I think that our insatiable desire to consume, in Western society, is pretty hardcore. We are so disconnected from having to get water, or having to produce food. Everything is at our fingertips. We have running water, we have electricity, and we don't have to send our six-year-old on a six-mile hike to get a bucket of water and bring it back. We are so disconnected from the most basic needs. The ugly side of that accomplishment is ennui, boredom, anxiety and depression because people don't need to struggle to get a meal in the same way. I feel like as a society people are bored.

What skills, knowledge and attitudes will young people need to thrive in the future?

I think that kids need to have the ability to be wrong sometimes—but also kind of right. There is that classic John Lennon story where when he was a kid his mom told him that the most important thing in life was to be happy. John Lennon was in Grade 3 and his teacher gave him the assignment of "What do you want to be when you grow up?" and John Lennon wrote "Happy". The teacher says, "I don't think you understand the exercise" and John Lennon's response was "I don't think you understand life". That's amazing, right?

I love the idea that kids can be in an environment where they can guess and they can be wrong and they feel safe. I love an environment where they don't feel like the whole world is going to come crashing down if they guess the wrong answer. The consequence there is that they guess nothing at all. Kids won't put up their hand because the idea of being wrong in front of the class is too embarrassing. Kids need safe places where they feel supported. Having a space where kids can be their most honest self and not the self that they think the world wants to see... that's the future.

When thinking about the next 20 years, what role do you think art plays?

I think we really have to be conscious of everything when it comes to making sure that there is art in schools. That we are not just programming robots, that we are lighting fires in young kids, because if you light that fire, or fan a fire that is already burning, it could be amazing. We have no idea who could come out of Vancouver in the next generation. It could be the next Chris Hadfield, the next Michael Bublé, the next John Lennon or the next Gandhi. Whomever it is, these people come from somewhere and at some point along the way they had help to become who they are.

We want to hear from you!

What's your vision of the future?

At ArtStarts in Schools, we want to ensure that young people across British Columbia have opportunities to develop their curiosity and creative potential and to build skills to thrive in the next 20 years—and beyond.