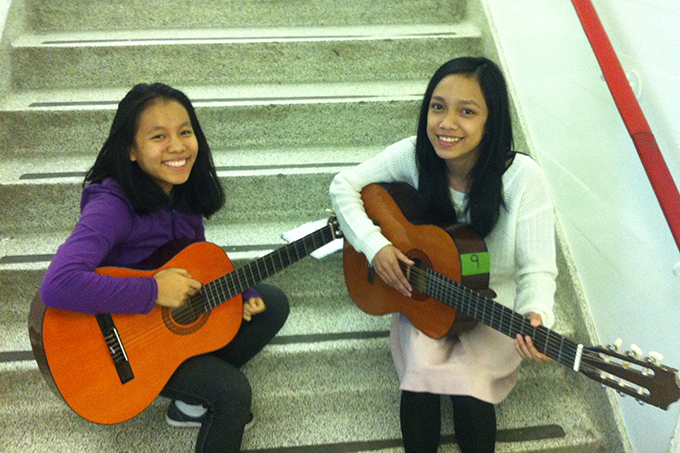 This project received funding from a large-scale Artists in the Classroom grant. This blog post was written and submitted by artist Jesse Davis Selkirk, who worked on this project with educator Reece Worth at Eric Hamber Secondary and Killarney Secondary in Vancouver. This post is part of an ongoing series chronicling the progress of select AIC grant recipients.

The Song Writer's Education And Training (or S.W.E.A.T.!) project took place at Eric Hamber Secondary and Killarney Secondary in Vancouver. Facilitator Jesse Davis Selkirk, a professional artist and songwriter, came into the senior level guitar classes once per week over a four month period, and guided each group in an ongoing conversation about songwriting. Students were encouraged to critically examine their own tastes and come up with ways that the elements they liked when listening to music could be applied to the process of creating it for themselves.

After discussing a wide range of topics, from mood to dynamics to lyrics and melody, as well as spending time experimenting with their own compositions, each class spent the final month of the project composing a song as a group. These two songs, as well as a number of tunes that individual students had composed went on to be recorded at Creativ Music Centre, a professional recording studio.

With large class sizes at both schools (35+ each), it took some time for the students to relax and begin to feel comfortable offering opinions or sharing early creative attempts. However, as a sense of familiarity and trust developed within each group, students began to be willing to open up, share their views and the material that they had been working on, as well as collaborate with each other. 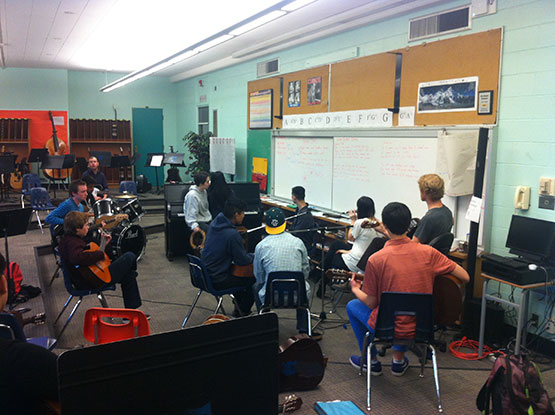 Real excitement started to emerge when we began composing together as a group. It was fun to see the kids getting into the zone and offering ideas and critical insight towards a piece that they could all take ownership of. I think it's safe to say that all of the students involved were able to push their comfort zones and try something that they hadn't experienced before. Whether it was something as simple as confidently delivering a rhythmic figure in time with others, to something as challenging as playing an original composition in front of one's peers, it was inspiring to see the students having fun and getting engaged with the creative process. 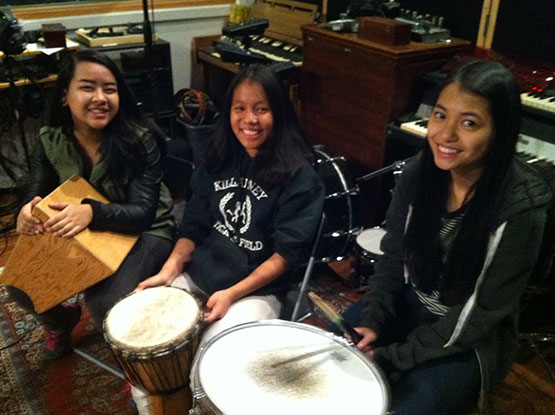 Students who were involved with the final recording project were clearly very excited. The studio environment was definitely new to them, and we made sure to work in ways that would make them as comfortable as possible so as to allow their playing to be relaxed and at ease. We were particularly happy to see two students who had been very engaged with the group writing process, but hadn't yet composed anything on their own, end up writing a song at the studio itself in just a couple of hours, which they then were able to record. 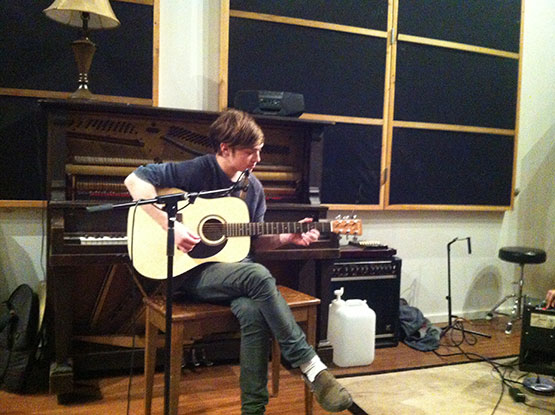 Ultimately, learning to create and share music is a very complex process that involves a person's entire self. It offers deep educational benefits, as well as personal ones. In a culture which does a very poor job of acknowledging emotions, it is so inspiring to see a student find a constructive outlet that they may not have had otherwise. In an educational system which often favours linear, analytical thinking this project has allowed students to spend time immersed in a learning style focussed on lateral thinking, and experience the state of flow which is so important to human happiness and effectiveness. In a society that discourages vulnerability, S.W.E.A.T.! helped to demonstrate to it's participants that success happens as a direct result of allowing oneself to make mistakes and learn from them. Additionally, it was great to see students connecting with each other over their music that may not have ever found common ground otherwise. It was also very gratifying to see participants overcoming the challenges they faced in writing songs, calling on untapped reserves of self-confidence, or developing a more disciplined approach to the creative process.

For some students the project will be a stepping stone towards a lifelong engagement with music, either as a career or as a dedicated hobby. Having Jesse the artist-facilitator as an ongoing contact through social media, etc, will be an invaluable resource to any participant looking for guidance or mentorship in the future. For others the project has simply deepened and broadened the way that they listen to music, and will enrich their future lives in more subtle ways. No matter how participants engaged with the project, it is safe to say that all involved benefited from it and found something valuable to take away.

Feeling inspired? Apply for Artists in the Classroom grants to work with professional artists in your own school. The next deadline to apply is May 28, 2015. Learn more at artstarts.com/aic