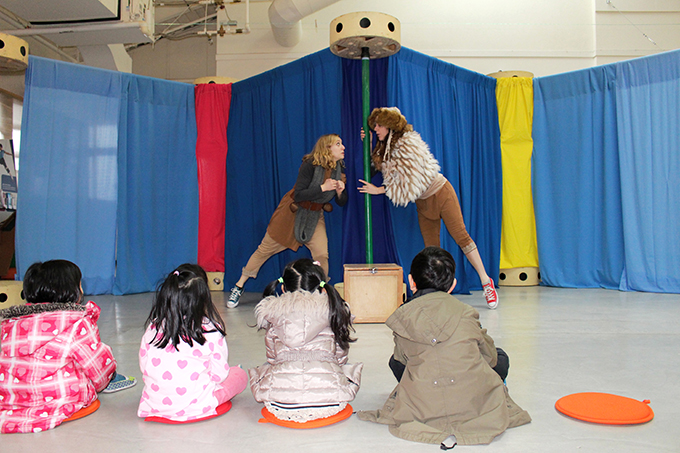 Story Theatre Company joined us in Vancouver for ArtStarts on Saturdays and in New Westminster for ArtStarts at River Market this past weekend to tell us a tale of treasure.

But the Victoria-based troupe told more than just a tale of jewels and gold — though there was plenty of that as well. They spun music and song, as well as some American Sign Language (ASL) to give ArtStarters some sage advice. 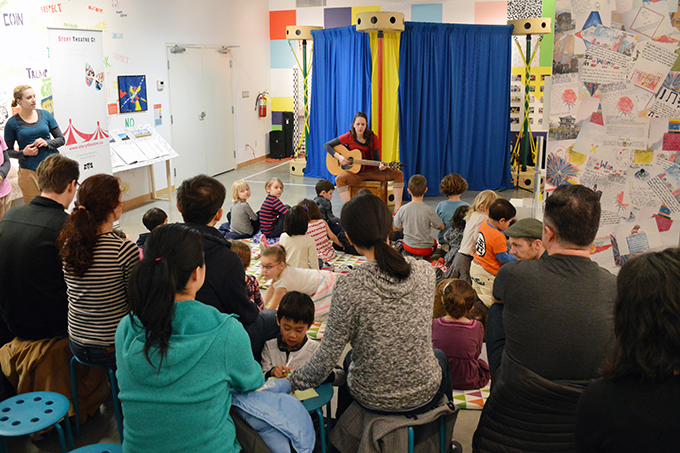 Woven into Rhymes, Reason and Rascals, a tale about a king who seeks the greatest treasure on earth, is the wisdom of people around the world. The king sends three knights across the world to gather treasure to make him more powerful, but as his horde piles up, he realizes that perhaps he's after something else. 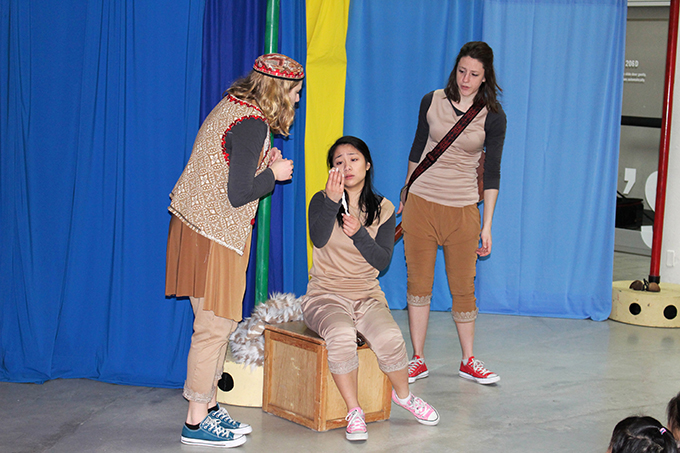 One knight found Socrates, who taught her about the value of listening. Another met Solomon, who imparted his wisdom about the value of sight and smell. Finally, one knight learned her lesson from a tailor and his family. While the material from his most beloved creations eventually fell apart, something more precious yet remained: stories. 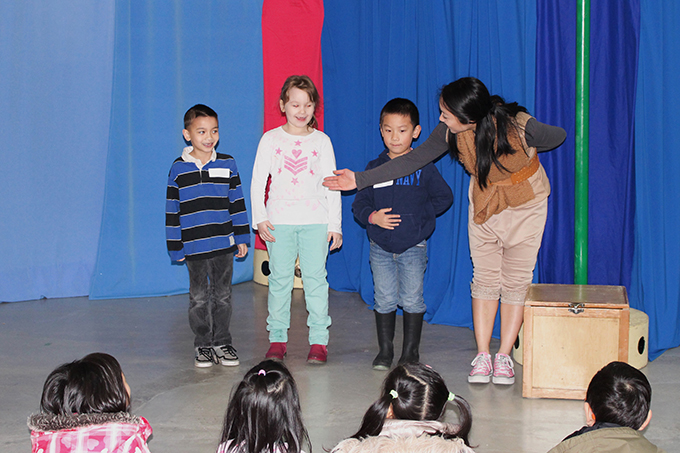 The audience sat rapt and giggling throughout the sessions with Jenny, Jenny and Alexandra (AKA "Not Jenny"). They even got to help out with the production. A few brave volunteers (or, counting the hands that shot up, more than a few!) helped make crowd noises, saying "rabble, rabble, rabble" while being led in front and back stage. The crowd also giggled as they tried to help a baker catch a thief, pointing this way and that around the stage. 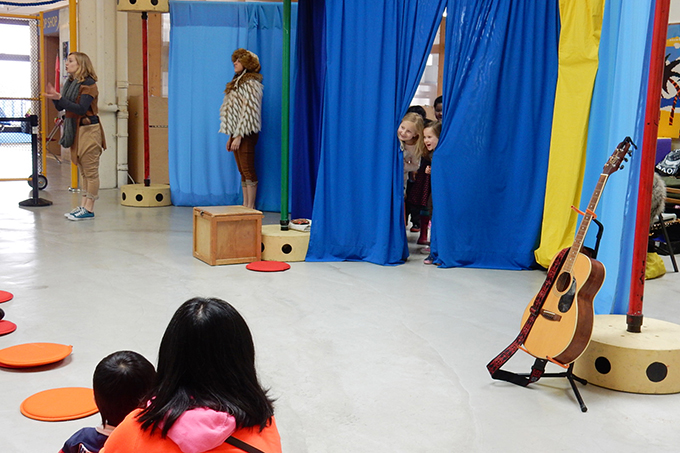 After the performance, Story Theatre Company taught the kids a few fun improv games that they could play with their friends or family. And since improv just requires your head and a friend, it's something they could take home and do immediately. 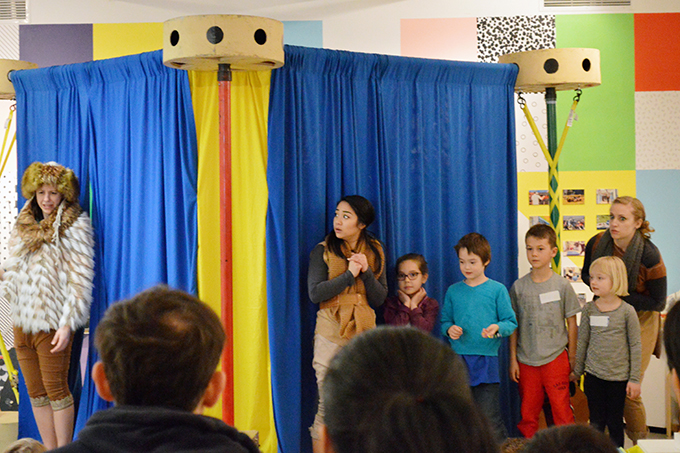 The first improv game, called "word at a time", meant each player could only add one word to the story at a time. The next game allowed the actors to use entire sentences to weave their tale. At one workshop, the kids in the audience gave Story Theatre Company "Santa Claus" and "doing the dishes" as starting points, and they told a story about a laughing Santa who came out of a plate being washed by a man named Gerry. 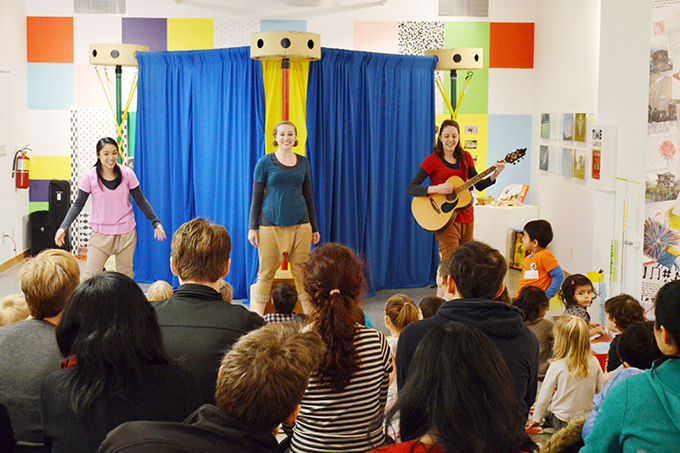 Finally, the troupe showed the children how to use a nursery rhyme as a starting point to try new styles. They signed it in ASL, and sang it styles from operatic to an Island theme blended with "Somewhere Over the Rainbow" to a Pokémon theme with a cow. The lesson? There's more than one way to share a story and find your own kind of treasure. 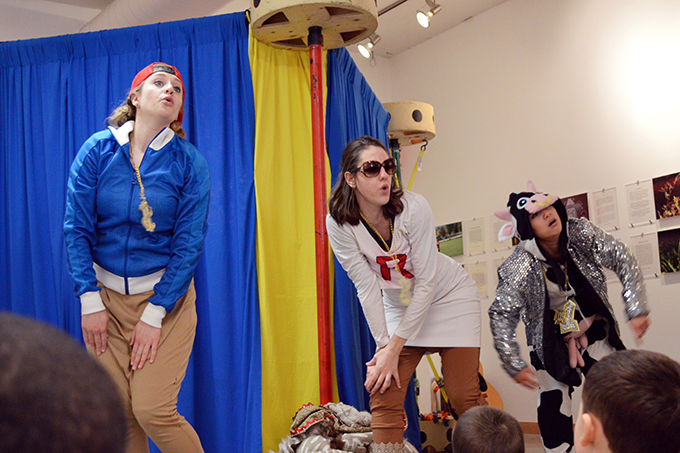 Join us next time for Cut, Paste, Action!, a hands-on art-making workshop with Kate Henderson presented as part of the Capture Photography Festival. We'll be at the ArtStarts Gallery in downtown Vancouver on Saturday, April 29 and River Market at Westminster Quay in New Westminster on Sunday, April 30 for free events at 11 am and 1 pm. Families will learn about various famous photographers, and have the opportunity to experiment capturing their own bodies in motion and will be cutting and pasting these images along with found photographs from magazines and newspapers into their very own layered collages.