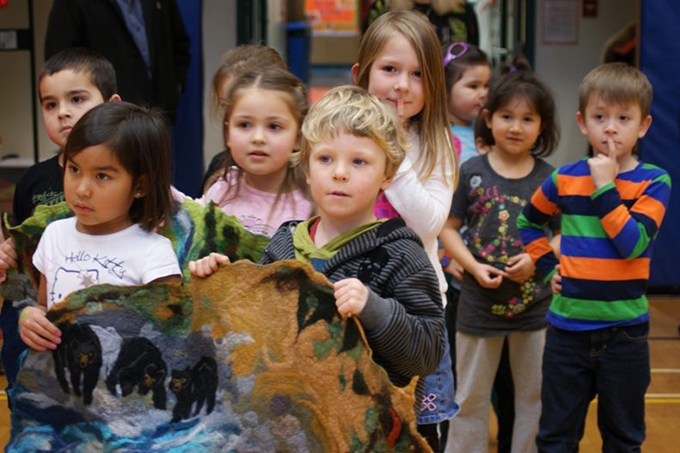 After many moons of working, we unveiled the thirteen felted Taan's Moons at Sk'aadgaa Naay Elementary School on the day of full Bear Moon, on January 15, 2014. Teachers, students and their parents from three of the six participating schools, many Haida elders and other community members joined together for a very special celebration of the completion of the felt creations.

Ms. Ives, Principal of Sk'aadgaa Naay Elementary, opened the celebration by welcoming everyone to the school. Ms. Yovanovich, Principal of Aboriginal Education, thanked the elders and language holders involved in this Haida version of the moons. She said: "This project is a good example of how to use knowledge and an excellent example of teaching practices. Our children were offered another view of how to use knowledge". Gwaaganad (Diane Brown), former instructor at the Skidegate Haida Immersion Program (SHIP) and Haida knowledge holder, spoke about the importance of (Haida) language being brought to life and being used in the classroom.

Alison Gear, an Early Learning Coordinator and writer of Taan's Moons story, presented the Taan's Moons project to the audience with a slideshow of images taken by Jason Shafto during the months we worked at the school. 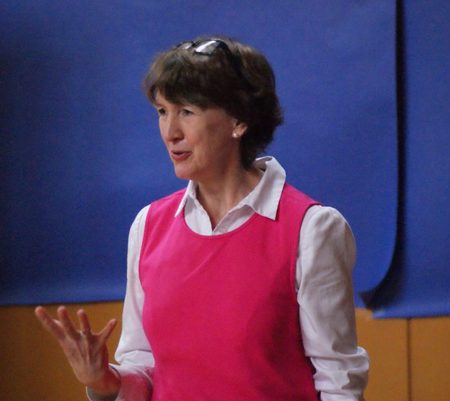 The children of each class had been patiently waiting in the hall until it was time to bring in their felt creations. They proudly carried their pieces in the gym, while Joan Moody's drumming resounded in the space. 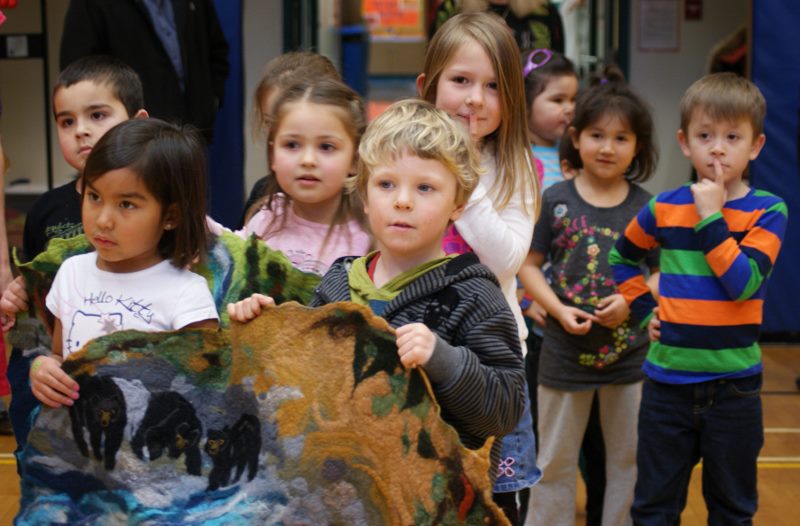 Once their pieces were up on the wall, the pieces of the other participating schools were unveiled. 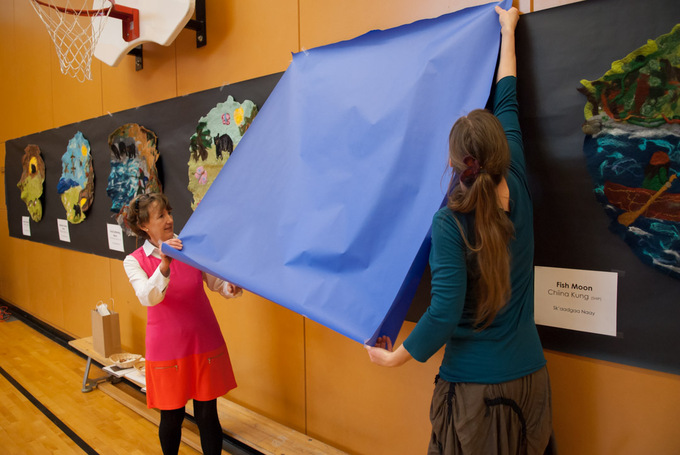 Many 'oohs' and 'aaahs' were heard. 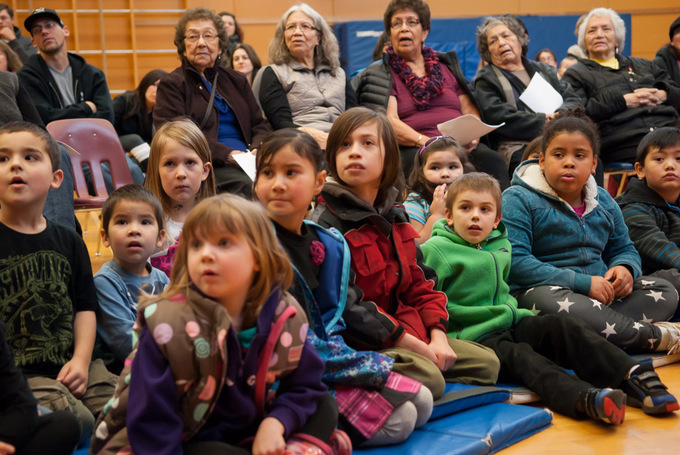 With every moon up and unveiled the Taan's Moons story was told, moon by moon, in Haida by Jiixa (Gladys Vandal), Haida weaver and teacher, and in English by Alison. 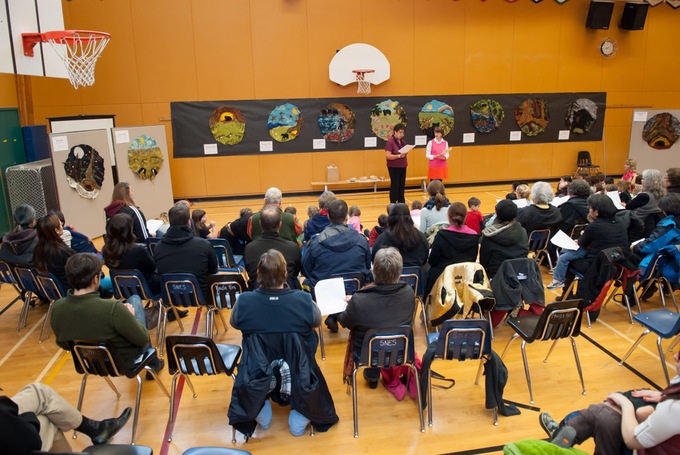 Guujaaw, carver and teacher, shared a song that "way back when was given to the people on Vancouver Island, when stories and songs were valued higher than material goods"; a song he is working on to accompany the calendar of moons. 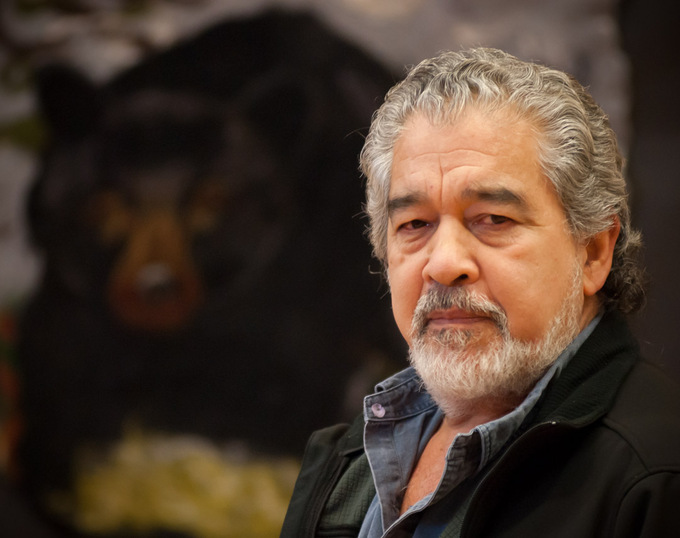 Kiki spoke about the sharing of these beautiful traditional Haida descriptions of the moons being like a drop in the water, and how all creations inspired by that drop - from Alison's story, to the creations of the children, to the creation of the upcoming Taan's Moons book — are like ripples in the water, moving further out and out, reaching old and new, known and unknown shores, perhaps inspiring new and unknown people. 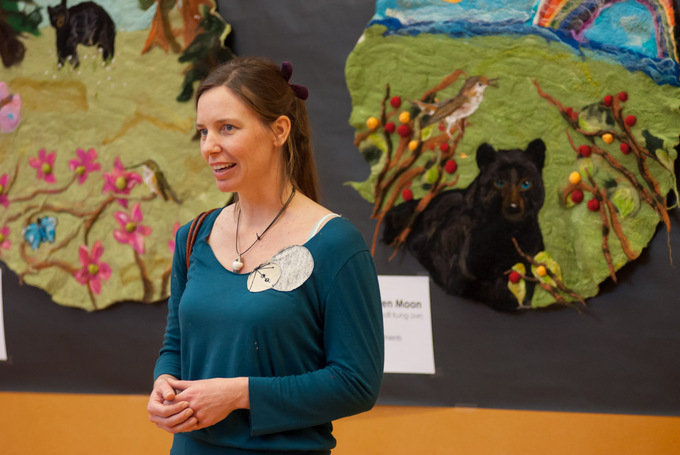 After handing out handmade felt gifts to Jiixa, Guujaaw, the students and a book documenting the process to the teachers, it was time for the audience to get a closer look of the felt moons. The book documenting the Taan's Moons process and felt playmat were on display and engaged young and old. As this celebration was part of a PALS (Parents As Literacy Supporters) session, Alison had a fun story-making activity planned for the children and their parents. With lots of materials to play with and a cardboard storyboard, they were able to create their own stories. 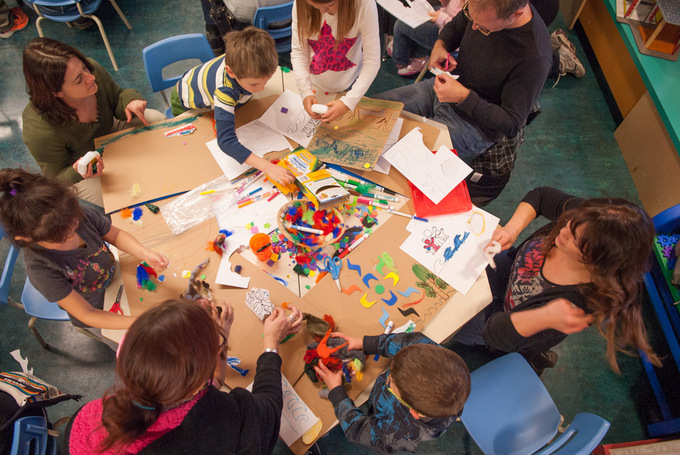 A special cake, resembling 'Migratory Geese Moon', made for a festive treat at the end of an inspiring afternoon. 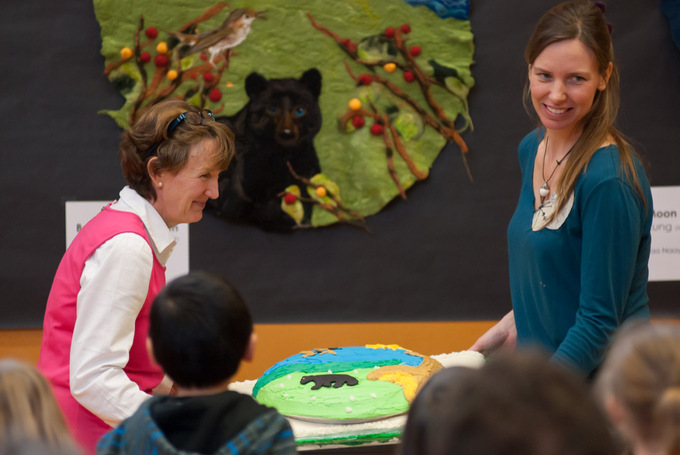 Thanks to photographer Jason Shafo of Full Moon Photo for beautifully documenting this experience.

Learn more about the Taan's Moons picture book published by McKellar and Martin.

See photos of the Taan's Moons project on display at the ArtStarts Gallery in Vancouver as part of the Timescpaes exhibition and watch this virtual gallery tour video: