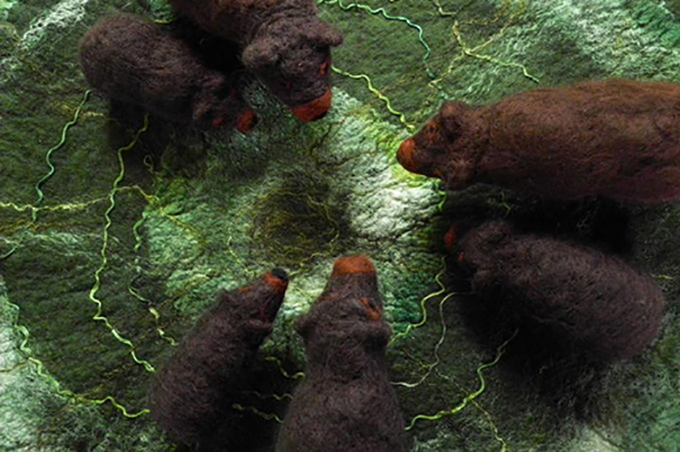 Together with writer Alison Gear, I'm working with the Kindergarten classes (some are mixed grades with Grade 1 and 2's) at six elementary schools on Haida Gwaii. After an introduction session, we work one full day in October and one full day in November at each school. Photographer Jason Shafto is documenting the process.

Inspiration for the project

The traditional Haida names and descriptions of each month of the year have been recorded by Joanne Yovanovich in the book Tluuwaay 'Waadluxan.

Haida months were marked by seasons and food gathering times and carry names like:

Alison Gear, a local writer and early learning coordinator, was inspired by these descriptions and wrote a poem called Taan's Moons, describing twelve full moons through the eyes of a bear (Taan). The poem brings to life the activities that happen each month on Haida Gwaii, traditionally and currently.

Alison invited me to embark on a creative journey with her to find a way to illustrate her poem through felt creations with the help of the children of Haida Gwaii. Last May, we brainstormed and put together a proposal to work with the Kindergarten classes of the six elementary schools on Haida Gwaii this Fall. We received support from Literacy Haida Gwaii and School District 50 and were honored to receive a large grant from ArtStarts in Schools.

Before starting the project, Alison and I gathered for a Sharing Circle with Joanne Yovanovich, Principal of Aboriginal Education; Beng Favreau, Executive Director of Literacy Haida Gwaii; and Tawni Davidson, Early Learning Coordinator. This meeting was held to acknowledge that we're working with traditional knowledge and to become grounded in an understanding of what we're doing and why. We shared our hopes, goals and visions for the project, we talked about the role of elders and traditional knowledge holders within the project, and brainstormed about activities in the classrooms.

At the end of September Alison and I visited each school for a brief introduction of the project, to meet the teachers and children and to engage them in their first creative explorations of the Taan's Moons story.  More about this in the next post.